Erin Hocker is going home to Montana for the district softball tournament this week and she's taking all of the Kirkwood Eagles with her.

Hocker twirled a pair of shutouts Sunday as the seventh-ranked Eagles blanked NIACC in the championship round of the regional tournament,  5-0 and 8-0 in five innings, at Kirkwood.

Hocker pitched all 12 innings in the two ballgames, tossing a two-hit shutout in the opener and hurling a one-hitter in the second game.

Kirkwood lost to NIACC in the winner's bracket final Saturday, so the  Eagles needed two victories Sunday to reach the district. They responded like true champions.

After Hocker tossed her two-hitter in the opener, Kirkwood Coach Eric  Frese asked his ace right-hander how she felt about pitching the second game against NIACC as well.

"He asked me if I was OK with pitching two games and I said I was,"  said Hocker. "I was ready to work for my team."

Hocker struck out 12 batters in 12 innings, with only two walks, and was in control all day. NIACC hit three home runs against her in its  6-3 victory over the Eagles Saturday, but it was different story Sunday.

"It was a very gutsy performance," said Frese, in his first year at  Kirkwood.  "They hit her around a little bit yesterday. For her to come back and compete like she did today, I couldn't be more proud of her."

Hocker and catcher Jessi Butler kept the NIACC hitters off-balance in both games. "We kept it outside and kept them off their toes," said Hocker. "We got grounders and my team was backing me up today."

Hocker, a freshman, is from Great Falls, Mont., which she said is about a six-hour drive from where the district tournament will be played this week in Glendive, Mont.

Hocker's family has seen her pitch only once this season, but they'll be in Glendive for the district tournament.

"They're planning on it," she said. "They're going to come with my  little niece."

Hocker readily agreed to pitch the second game Sunday when Frese popped the question. Bradee Bouman, Kirkwood's No.2 pitcher, has won 20  games this season and was the winning pitcher in Game 2 last Sunday when Kirkwood swept a doubleheader at NIACC, but Frese wanted his ace in the circle with the season hanging in the balance. 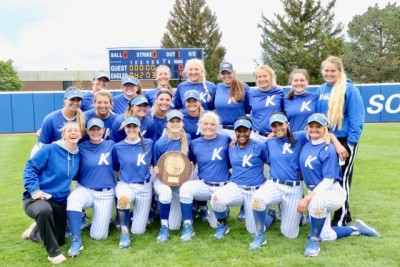 "I felt really good," said Hocker. "My blood was really flowing.  Montana is my home state, so I really wanted to go to Montana and play in front of my family. I'm so grateful."

Former Kirkwood coach Joe Yegge recruited Hocker before he left to become the associate head coach at DePaul. Hocker has responded with a  26-8 record and 1.89 earned run average. She ranks second in NJCAA  Division II in victories and ranks second in strikeouts with 234 in  215 innings.

"You know, I could not have done it without my teammates," she said.  "They are an amazing group behind me. And I love these guys so much.  I'm so glad I'm an Eagle and they made me an Eagle."

Freshman center fielder Randyn Carter, who missed the 2018 season at Kirkwood with a broken ankle, had a big day Sunday. She ripped a two-run double to give Kirkwood a 3-0 lead in Game 1, and she belted a  long home run and made a sensational running catch in left-center in  Game 2.

"We didn't want the season to end," said Jackson. "We've worked so hard and this is what we've worked all season for. We just wanted to  come out with energy and stay up the whole day."

Finn went 3-for-3 in the second game and had the game-winning double in the bottom of the fifth that made it 8-0, ending the game by the mercy rule. Butler had a two-run single to five Kirkwood a 2-0 lead in  the second inning

Shelby Hulsebus was 2-for-3 with two stolen bases in Game 2. She also had one steal in the first game, giving her 52 swipes this year for the top spot in NJCAA Division II.

The district tournament will be a best-of-3 affair in Montana.  Kirkwood and Dawson will play twice Wednesday at 3 p.m. and 5 p.m.  (Central time), with a third game on Thursday if necessary.

The district champion will advance to the national tournament in Clinton, Miss., from May 22-25.

"I know we've played a really tough schedule this year," said Frese.  "I think the league was pretty competitive this year, so I feel good about going in and being prepared to play.